This post has only one merit: I’ll consult it on Thursday (or Wednesday evening) to see where I was wrong in my expectations.

Major themes of the election campaign

The 2019 campaign has been weird in many ways. First of all, the electoral campaign began de facto with the agreement over the 2019 budget. That is nearly six months of campaigning. The government tried to use the time to create a political momentum by entering agreements over health care, transport and infrastructure, immigration and, finally, early retirement. None of this yielded any benefits in opinion polls for the government side.

Second, the Social Democrats have played a game of reversing nearly all of its policies from the Thorning era and delaying policy announcements on controversial issues until after the election. The Social Democrats under Mette Frederiksen have designed themselves as the party of the Male Danish Blue-Collar Industrial Worker of the 1960s, but it is really hard to see how the party will meet the challenges of the 2020s.

Third, judging from analyses of voter movements, the Social Democrats appear to have taken over the role of the transit terminal of Danish politics. SD attracts voters from the Liberals and the Danish People’s Party, while losing voters to the other “Red” parties.

Fourth, during May the Liberals have been busy reversing their economic policies of the 2015-2019 term. Somehow voters are to believe that both Social Democrats and Liberals are completely transformed parties.

Fifth, the campaign was hijacked in the early stages by an excentric (to say the least) xenophobe, bringing immigration and integration back on the political agenda. Or maybe not: Perhaps the correct analysis is that some 10-20% of the electorate are highly motivated by anti-immigration and -integration policies, while the remaining 80-90% have other concerns.

Finally, it has been very hard to see how the parties have adressed health care and climate, which were on top of voters’ agenda, in the campaign.

Which results should we expect on Wednesday?

The almost-as-easy one: The Danish People’s Party will suffer heavy losses and perhaps see its worst result since 2001. Nobody expected this six months ago.

The difficult one: Will Hard Line and New Bourgeois cancel each other out, leaving both parties below the 2% threshold, or will one or both parties enter parliament? Similarly, will the Christian Democrats benefit from voter disaffection with the Liberals and win a constituency seat in Western Jutland? We could have three new right-wing parties represented in parliament – or no new parties.

The others: Light losses for the Liberals, wins for the Conservatives, the Socialist Peoples’ Party and the Social Liberals and losses for Liberal Alliance and the Alternative.

Which government will we get?

Good question. The money are on Mette Frederiksen as the next prime minister. The Social Democrats want a single-party minority government, but the other “Red” parties will want to control the SD one way or the other – either by entering a formal coalition or by some kind of cooperation agreement. 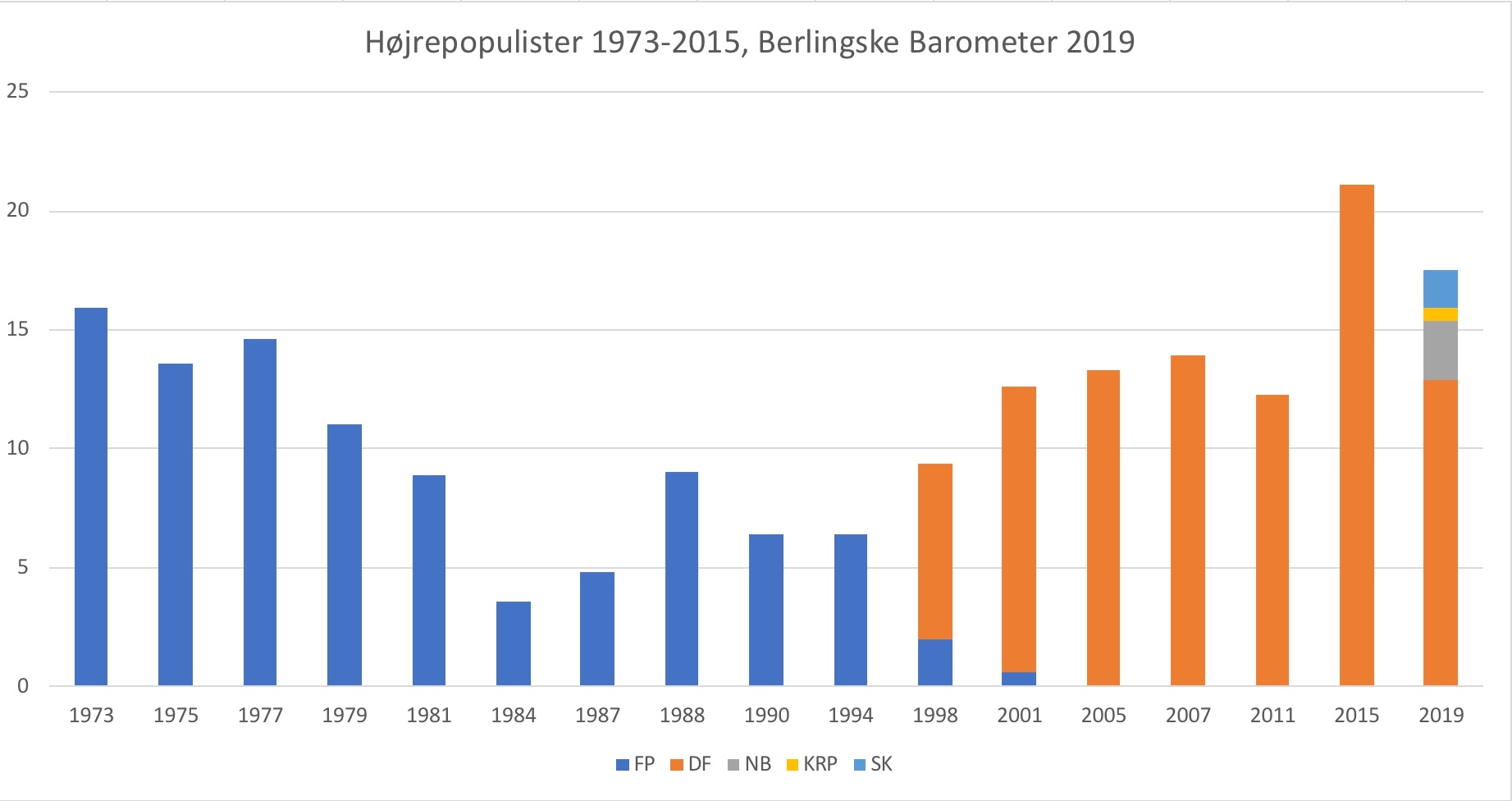 I tried to make a graph based on the current Berlingske Barometer looking at the performance of the populist/extreme right parties. The message is a mixed one: Combined, the parties perform below the 2015 electoral result of the DPP, but above the performance of DF in the 00’s and the 2011 election. Still, we see an unprecedented fragmentation of the extreme right.

When Prime Minister Lars Løkke Rasmussen called a general election for June 5, it marked the end of an unusual parliamentary term and the election looks set to be equally unusual.

Third, Løkke expanded his government in December 2016 by including the two small centre-right parties, Liberal Alliance and the Conservative People’s Party (Konservative Folkeparti) following a very complicated negotiating process leading up to the agreement between the three parties and the Danish People’s Party on the 2017 budget. This was the first time since the formation of the Social Democratic – Liberal government in 1978 that a Danish prime minister expanded the government during an electoral term.

Generally, the 2015-2019 term has been characterized by conflicts between the Løkke Rasmussen governments on the one hand and the Danish People’s Party (Dansk Folkeparti) with the governments trying to accomodate DPP demands for tighter immigration policies while (unsuccessfully) trying to pass tax cuts for high-income earners. The DPP has been engaged in a sort of indirect warfare against the Liberals with the smaller Liberal Alliance being the object of most of the direct attacks. The effect has been to make the centre-right “Blue” bloc look unstable and inconsistent.

In the final months of the parliamentary term, the government has tried to regain control of the political agenda by entering agreements with the DPP including continued tightenings of immigration and integration policies, a reform of the organisation of the public health care system, investments in road transport and finally an early retirement agreement. The latter even has the potential of undermining central Social Democratic electoral promises of easing early access to the old-age pension system for manual workers as the Social Liberal Party (Radikale Venstre) joined the four centre-right parties in the agreement.

None of this has had any effect in reviving the government’s fortunes in opinion polls. In fact, the last six months has seen a collapse in DPP support with the party now polling 12-15 % of the vote and with the Liberal Alliance also facing major losses in the election. To add insult to injury, the centre-right is experiencing a major fragmentation on the extreme right with two new anti-immigration parties, the New Bourgeois (Nye Borgerlige) and Hard Line (Stram Kurs) competing with the Liberals and DPP for the xenophobic vote. In the unlikely event of a centre-right win, Lars Løkke Rasmussen would have to navigate between parties setting up ultimate demands on immigration policy – many of which would put Danish participation in the EU and international agreements in jeopardy – and economic policy. A party set up by maverick businessman Klaus Riskjær Petersen has only added to the confusion.

Meanwhile, the centre-left is also characterised by disagreements between the parties. The Social Democrats under Mette Frederiksen who took over as party leader immediately after the 2015 election has put a major effort into reversing the party’s policies on immigration and economic policy in an attempt to attract traditional blue-collar voters from the DPP.

While the strategy, which has also included attempts to create an alternative bloc consisting of Social Democrats, the DPP and the Socialist People’s Party (SF) to exclude the Social Liberals and the Red-Green Alliance (Enhedslisten) from any influence on immigration and integration policy, has stabilised Social Democratic support, it has at the same time strained the relationships between the five parties in the “Red” bloc with the Social Liberals, the Red-Greens and the green Alternative Party (Alternativet) declaring that Mette Frederiksen could not automatically count on their support in the formation of an new government after the election.

Polling trends on the centre-left point to a complicated picture with the Social Democrats gaining votes from the DPP but looking set to only marginally improve its overall performance from the 2015 election. At the same time, the Social Liberals, the Red-Greens and the Socialist People’s Party, which all call for more liberal immigration and integration policies, look set to gain votes. The overall picture thus is one of polarisation on the “value politics” or GAL-TAN scale while both blocs suffer from internal conflicts over economic and tax policies. At the same time polls consistently point to a clear victory for the “Red” bloc.

Note: Political scientist Erik Gahner Larsen calculates a tracker of political polls and also a projection based on active polls. When reading individual polls, one should note that there are significant house effects on Danish polls while the existence of three new parties make calculations and predictions difficult.